GMOs are genetically modified organisms, microorganisms or plants whose genome has been altered unnaturally for a more efficient production of foods. Genetic engineering operates with recombinant genetic bio-technologies in order to increase production, consumption and add more nutrition value. It is an uncommon combination of different genes such as plant, animal and bacteria putting an emphasis on safe food consumption. Besides that, it aims to provide benefits to farmers by increasing the protection from herbicides and thus, resulting in more crop yields. It is a revolutionary system that has high hopes in the future in terms of food industry progress, reducing allergic reactions to foods and establishing virus resistance to any kind of viruses contained in the actual foods. 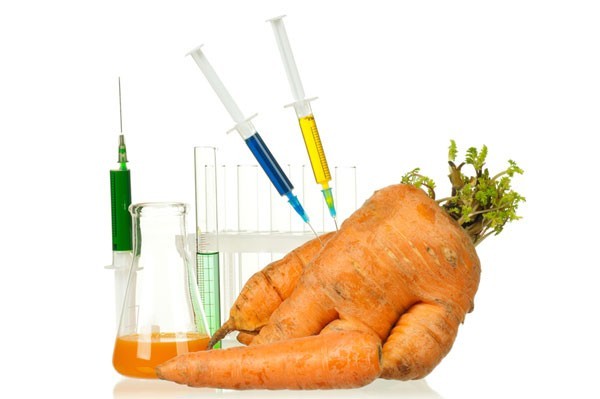 All GMO products on our market have been thoroughly assessed according to the Codex Alimentarius principles. Therefore, these products don’t present any health problems for humans. However, it is not correct to say that all GMO products are safe for consumption. Each product has to be assessed individually based on the combination of genes utilized. It is rational to believe that unsafe GMO foods won’t be allowed on the market.

However, many countries have not yet regulated the consumption and production of GMO foods because of apparent health risks that Genetically Modified Organisms present for the human population (we are going to discuss the widely known health risks below). More than 60 countries have restricted the production and sale of foods containing GMO. On the other hand, the USA, has allowed GMO production and sale on its territory, therefore, persuading people to buy these foods. The biggest problem is not being able to know whether the product you usually buy is GMO or not. These products are not labeled. Instead, they are sold alongside naturally produced foods.

There is a controversy going on all around the world whether Genetically Modified Organisms actually provide any benefits at all. That is why countries like Japan, Australia and some other European countries have restricted, banned or even prohibited the production of GMOs. Given the statistics, Europe seems to be the most conscious continent realizing the health risks that GMO production actually provides.

See Also: 8 American Foods That Are Banned Around The World

First and foremost, what everybody has to know is that people who stand behind the most prominent GMO food production companiesare those who did their own research and identifiedthe wide variety of advantages for both, farmers and consumers. Disregarding the risks, they went on promoting “the high nutritional value and crop protectant” genetically modified organisms as if they were a healthy choice for the population.

GMO testing on animals has resulted in a huge amount of organ damages. However, this information is omitted for some essential reasons. We will enumerate some of the dreadful health implications in tested animals.

Even more terrifying results have been achieved after huge amounts of people died from a particular GMO food. You can search the information online.

Besides that, it is a widely known fact that Genetically Modified Foods provide risks for the environment as well. The toxicity caused by GMO negatively impacts bees, monarch butterflies as well as birds. Bees are indispensable for crop pollination. However because of the methods used by GMO companies, they are endangered. Pests, instead, can easily adjust to the highly toxic environment.

However, there’s more to it. This genetically modified DNA penetrates the soil and the compost, then, it gets into byproducts. Afterwards, it is carried by pests and bees in form of pesticides and herbicides and is spread all over the place, thus, infecting the plants and everything around. The future doesn’t seem promising at all!

The bottom line would be that GMOs might provide several positives such as help farmers extend their crop yields and reduce the overall costs. But the biggest problem is that there are also severe drawbacks that cannot be ignored. GMO production means destroying everything natural – our bodies and the whole ecosystem.

Our recommendation to you would be to learn more information on the topic of genetically modified organisms, to see what you can do to help reduce or eliminate GMO from your life (though it is pretty hard to do so since there is no labeling on the products you buy). But now that you know that most plants are GMO cultivated, you will most likely be more careful when selecting the foods you eat. You can always opt for naturally grown fruits and vegetables or even better, organic fruits and vegetables.

Kelly Everson (Facebook) is an American author and having MA in English literature. After spending time as a writer in some of Health Industries best websites, she now works as an independent researcher and contributor for Consumer Health Digest. In her spare time, she does research work regarding Beauty and Women Health, Fitness and overall health issues, which acts as a fuel to her passion of writing. When she is not researching or writing, you can find Kelly staying active, whether it be practicing yoga or taking swimming classes.

How To Whiten Your Teeth Naturally? (Fast At Home)